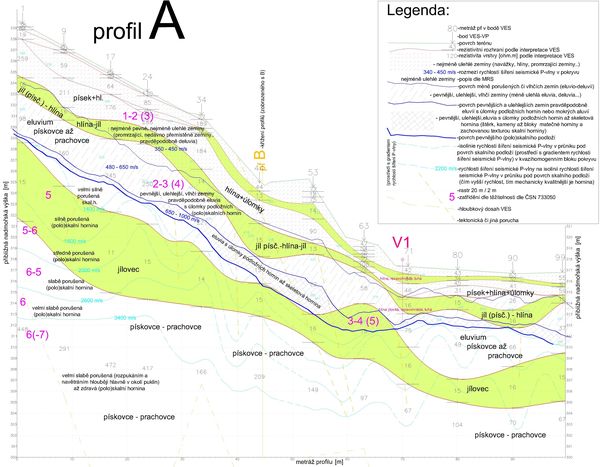 Geophysical prospection of potential landslides is based on use of following complex of methods GPR, SRS, VES, VES-IP, MEM and DEMP. There is an simplified example of such a prospection of planned communication cutting in slope of flysh rocks on fig. 1: The aim of the survey was to determinate the probability of destabilisation of the slope by cutting the terrase of communication bed in the slope. In the section there are the results of VES(by black and red line) and SRS (blue line). In section left side there are the layers with light green fill supposed to by very finegrained (according to VES results - lower resistivities) and they can imply the old or future gliding surface lanslide layer (in the case of cutting of potential landslide heel or humidisation of slope...). The slope can be humidified by the more resistive collector layer on the surface between green layers(chainages A from 0 to 30 m). The most probable lanslide gliding surface can be the layer in approximately 6 m depth which has similar position as SRS shallowest interface (blue thin line). Thickness of the most loose layer (may be older lanslide is between 2 to 7 m). Deepest seismic refraction interface is probably (according VES) the surface of claystone. An example of typical geophysical methods complex (MEM - multicable electric resistivity measurement, VES, SRS) results is given at following pictures: There is localised lanslide gliding surface by MEM and SRS (thickness of low very velocity layer - old landslide), with litology precised by VES. 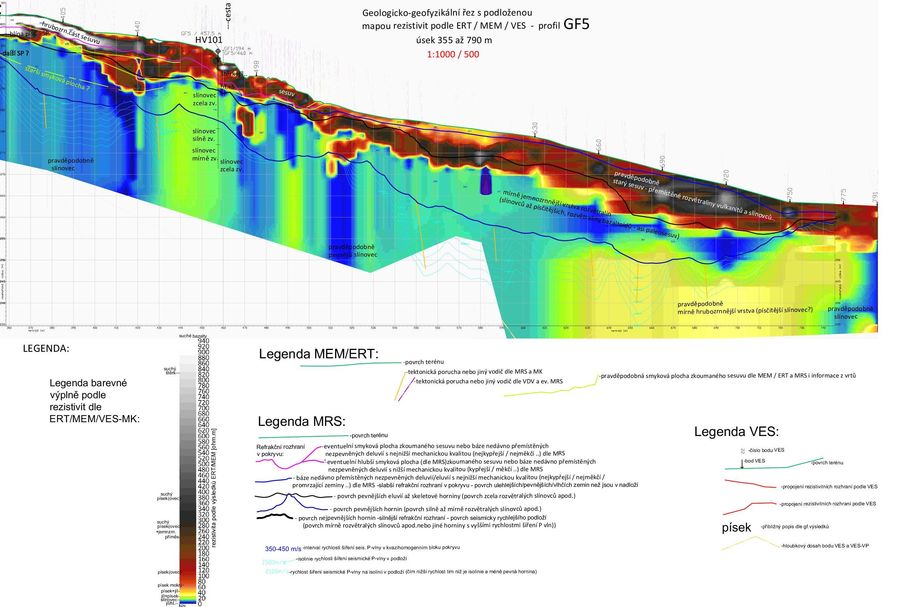 On both figgures above there are visible higher resistivity landslide body bordered by lower resistivity gliding surface layer and layers of older paleolandslides. Example of method DEMP (intrument GEM 2-181) use in such field: 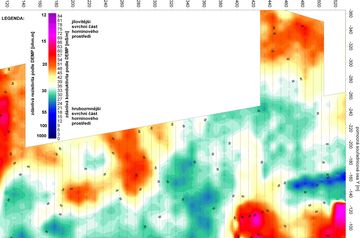 On the apparent resistivity map according to DEMP you can see higher resistivity areas with higher intersticial permeability (blue coloured) and to the red and purpure toned more conductive areas of clays outcrops. An example of resistivity section according to VES on potential landslide slope of flysh rocks:

There are layers of sandstone (blue) discoverable, which are by its shape eliminating possibility of deeper landslide. Shallower parts are probably in casual creeping landslide move...