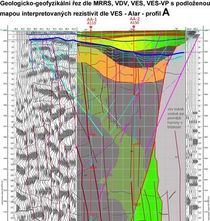 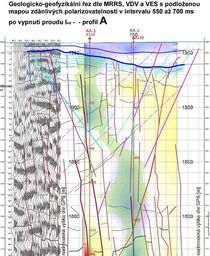 Geological-geophysical sections up to depth of 350 m according to reflection seismics (depth section on the left figure), VES-IP (apparent polarizability section is under the middle section illustration), VES (resistivity section according VES is in right picture), also with results of SRS and VLF methods. Those results anabled to situate the hydrogeological exploratory drill hole to the point with highest probability of hitting the tectonic fault aquifer deeper then 150 m..